Today was a play day, driving through the Hill Country wildflowers to the Llano Earth Art Festival, home of the National Rock Stacking Championships. Yeeeeee-haw!

Of course, we also stopped for an antique store or two along the way.  So in lieu of making a patch today, I found the inspiration for one … 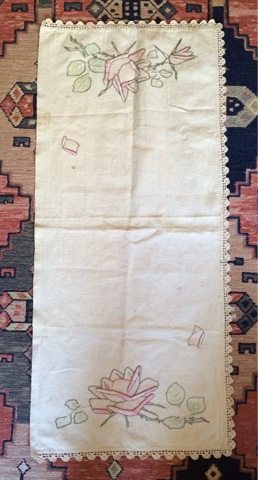 A rather worn, heavy linen, sorta vintage dust catcher … um, dresser scarf. But what I loved (beside the $2 price tag) was this …
We also scored a couple of copper pots. This lovely … 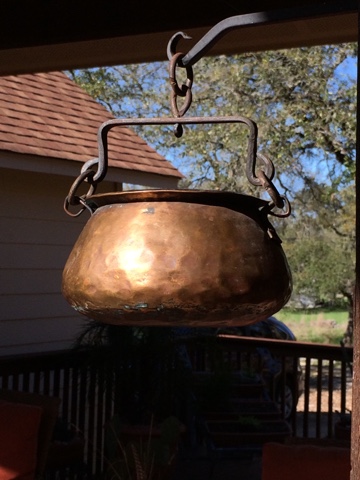 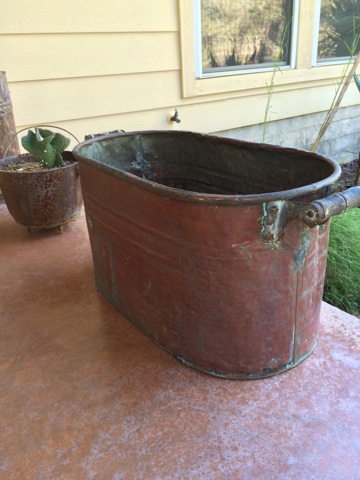 Oh yes, we finally made it to the festival. Enjoy the sights … 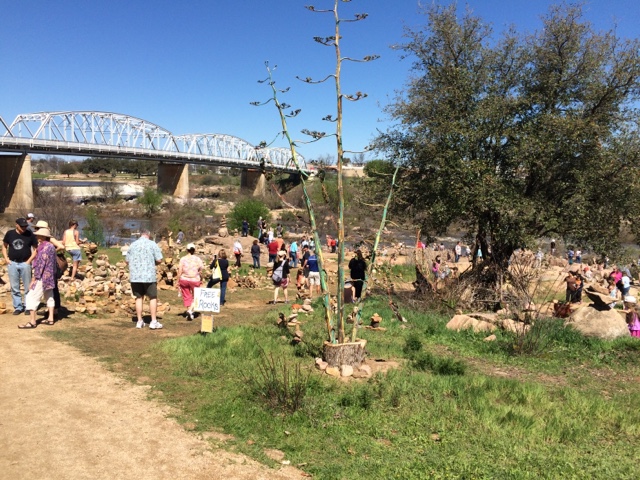 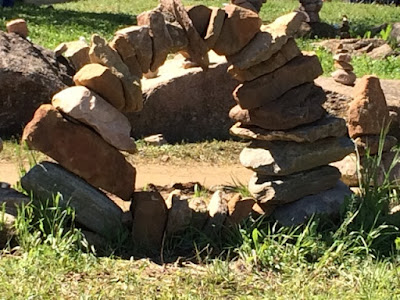 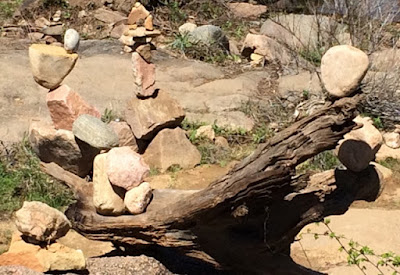 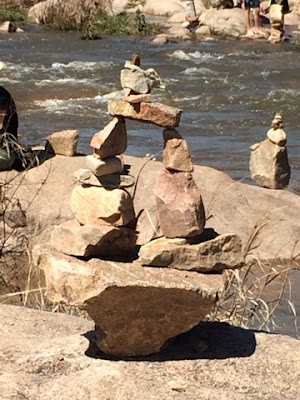 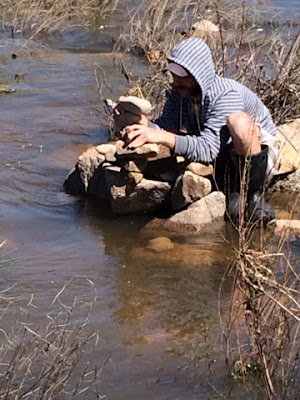 And coming soon to the floodplain …
January 27, 2015February 10, 2019 ~ Liz A ~ 8 Comments
Okay, so the Fifth Dimension may not have been the coolest band ever, but if you are a person of a certain age I totally know what you are humming right now …

Anyway, this is the story of Don’s latest assemblage and how it came to be …

It actually started with this board from Junkology … 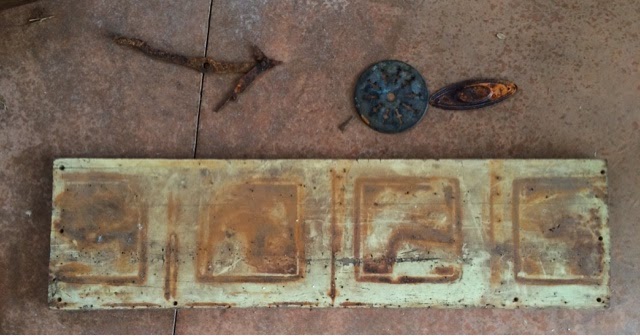 Chief among them was a sunburst, patterned after the daily specials board Don spotted at the Red Sky Cafe last summer (and yes, the tuna was to die for) …

The problem was, the Junkology board seemed like it was a little too long and a little too narrow for a sunburst …

So we started brainstorming ways to take advantage of the four “frames” on the board.
“What about phases of the moon?” I suggested …

Which sent Don out the door to play with metal and milk paint, creating everything from a crescent … 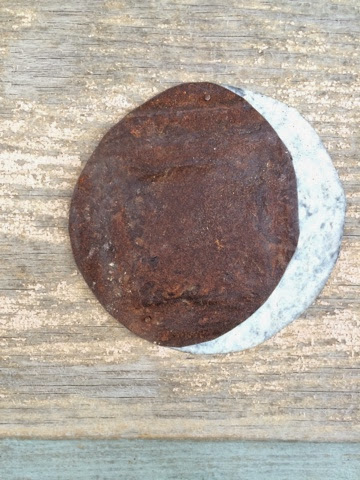 Except … the moons totally didn’t work on the yellow board, ending up on another board instead (yep, from that same trip to Junkology).

So the yellow board awaits and the sunburst idea is back on the table. To be continued …

I have an on-again off-again thing about New Year’s resolutions. In the past, I made predictable resolutions to eat better, lose weight, exercise, etc. etc. which resulted in failure more often than success … the resolutions abandoned, most forgotten mere weeks into the new year.

And once upon a time, I also made New Year’s predictions … at the annual party hosted by Barb and Ray Laroche, where we would all read our predictions from the previous New Year’s Eve, then write new ones for the upcoming year. The one I  love to recall was from 1992, when we were all prompted to write down who we thought would be elected in November. My prediction that it would be Bill Clinton was met the following New Year’s Eve with exclamations of “Who even knew who he was this time last year?” I was a rock star. Unfortunately, every prediction I made after that one was an absolute, totally forgettable let down.

Still, there’s something about the new year that begs for my attention, a yearning to find my better self. So a couple of years ago I decided to try one-word resolutions … clear, simple, memorable, accountable.

In 2013 I resolved to Create which resulted in …

There was more, but much of it went undocumented, leaving a gaping hole in the 2013 blog archive.

In 2014 I resolved to Blog … which got off to a slow start, quite honestly. After a lone post in early January, I dropped the blog-ball big time. Then it happened. On March 9, 2014 I discovered that my blog had been accruing thousands of hits on the Rain Chain post from 2012, mostly from Pinterest links. Who knew?!?!

It was just the motivation I needed to get blogging again. And blog I did, as you can see from the chronological BLOG ARCHIVE to the right. However, after the initial rush of enthusiasm and a mini-spate of posts, I once again lost heart … most of the hits on the blog continued to be rain chain views. What was the point of blogging if no one was reading?

Fortunately, the story has a happy ending thanks to Jude Hill’s Spirit Cloth. After discovering the concept of slow cloth (via Pinterest) I read Jude’s entire blog from 2006 to present, then signed up for two of her online classes. Spirit Cloth 101 gave me to a new way of looking at cloth-making, but the solstice-to-equinox journey through Considering Weave gave me a new community within which to make it.

When Considering Weave ended in September, I was determined to maintain connections to my newfound cloth-mates. More and more my posts were directed to them as an audience and as I visited their blogs, I belatedly realized that some of them had links from their blogs to mine. Inspired, I created my own  KINDRED SPIRITS links, with which I now follow the latest missives from the blogosphere.

The conversations that have resulted from these interconnections are sometimes hard to follow (where did I post that comment?) and some revelations have sidetracked into private emails. But there’s no question that I am now a part of a very real community. There have been shared experiences, such as the post about it’s only RAIN that led Saskia to a Mystiqueros concert in the Netherlands. 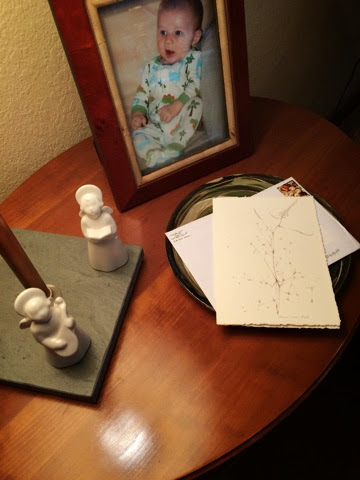 More to the point, the friendships that have been forged encircle the globe, enriching our spirits … because the truth is that Don has become a steady, if stealthy, reader.

Thus it was clear, as I updated my profile yet again, that my focus has shifted over the life of the blog from cooking to crafting to stitching (a term I now prefer to “needleworking” which sounds a bit too much like … well, work). I have come full-circle to where my creative life began.

For 2015 I hereby resolve to Stitch … and to share the journey by creating and blogging (almost) every step of the way. I hope you’ll join me.