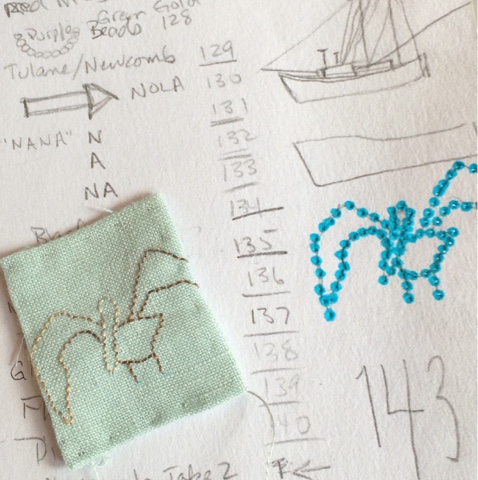 One last meal in New Orleans, this time breakfast at Cafe du Monde … 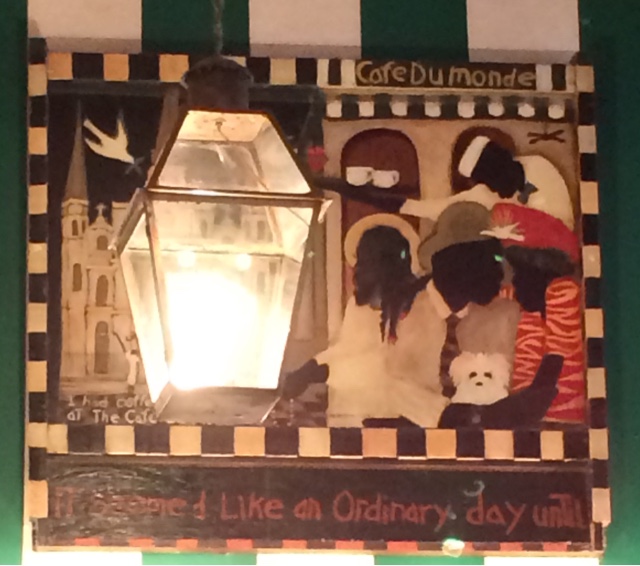 I was prepared to be underwhelmed, but I left a believer: they really do have the most amazing beignets!

Spotted this on the way back to our lodgings … 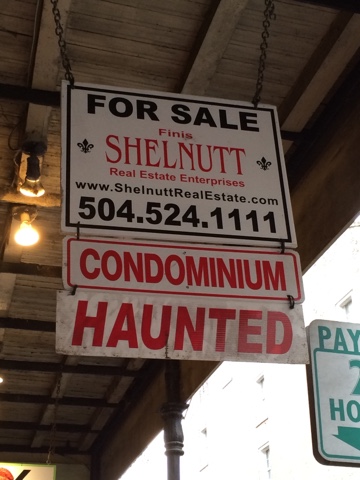 Then it was time to go, following the improv one way sign one last time … 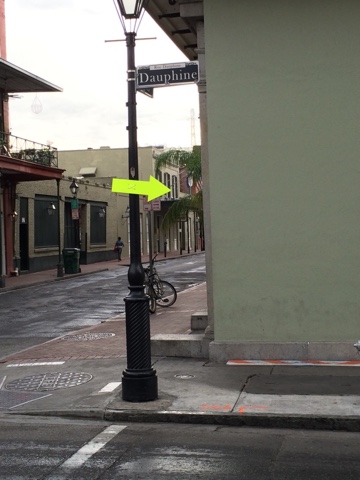 Winding our way back up I-10, then down the Bolivar Peninsula to the Galveston Ferry … 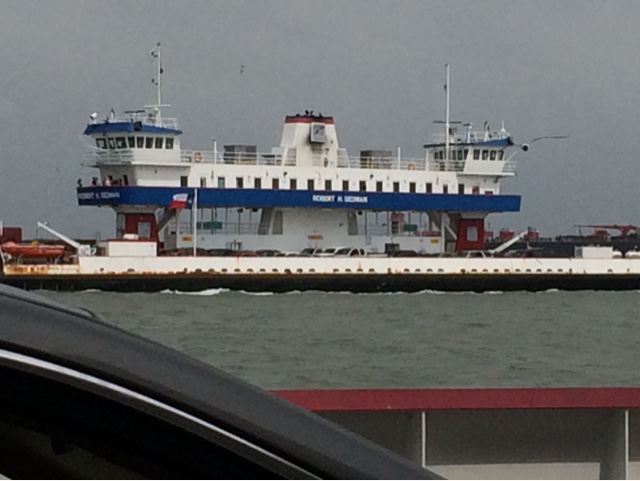 We didn’t spot any dolphins, but apparently the fishing was good … 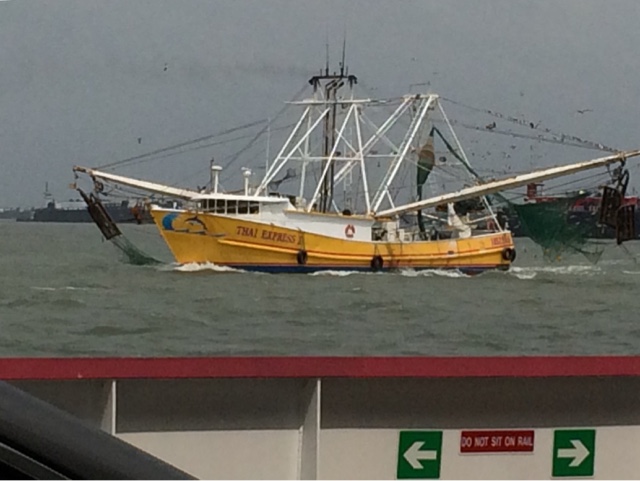 according to the locals … 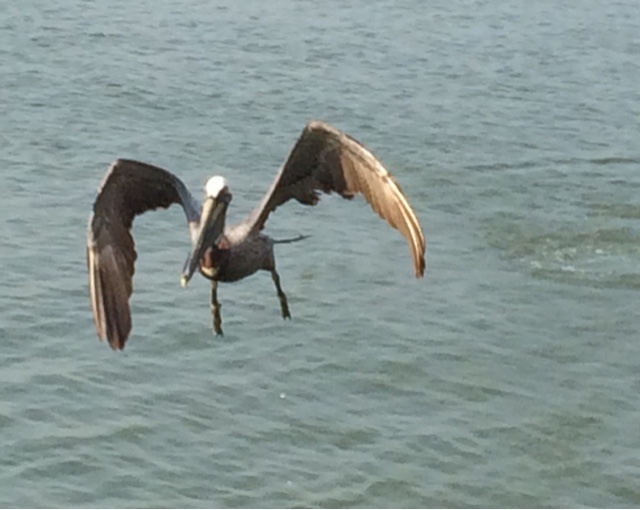 The abridged version of this post is:  a beautiful creature met its end today. This is my remembrance …

The (much) longer version follows.
***

I’ve always been fascinated by the natural world. As a child, I would walk to the Mineola public library by myself (in those halcyon days when walking to school was what you did, of course we walked to the library, too). I remember asking once where I could find books about whales and was directed to books about Wales. After that, I just looked for myself.

I read every book they had about whales, then moved to books about horses and dogs. It didn’t take me long to explore the other shelves in the science section. I remember reading books about how to cure your dog of dropsy and how to build an air raid shelter (I was incensed when my parents weren’t interested … my mom said something like “If they drop the bomb, I’d rather be dead”).
But the book I remember best was one on how to create your own natural history museum. It had chapters about how to organize and label collections like rocks, fossils, shells, and butterflies. It even had diagrams on how to skin and mount small animals … not that I ever did that, but I was fascinated nonetheless. Sadly, living on the terminal glacial moraine that is Long Island, there weren’t fossils and all the rocks were cobbled remnants from somewhere in New England. Shells we had in abundance, yes … but I never did make my own museum.
***
Do you remember Mutual of Omaha’s Wild Kingdom? I loved that show, especially when Marlon Perkins would say, “Watch out Jim!” from the safety of his studio office. And I always hoped Disney’s Wonderful World of Color would feature a nature program with flowers opening at hyper-speed (even if they were in black and white on our TV). I saw every Jacques Cousteau and National Geographic special, even when they weren’t required for homework. For a time, I was sure that an oceanographer was what I was meant to be.
***
I majored in geology at William and Mary. The one book I remember from those four years was The Descent of Woman … a scientifically-reasoned alternative theory about the evolution of humankind. Another Elaine Morgan title, The Aquatic Ape. is on my book shelf to this day. I still think it’s a good theory.

I never became a geologist or an oceanographer though.

***
In my mind, the third week in June was (and is) the reason for the other 51 weeks in the year. A week at the Outer Banks of North Carolina, walking forever gathering shells, watching the sun and the moon, the weather and the waves, inhaling the deep saltiness of it. Feeling fully alive. Yes.

That was where I was going to retire, yes I was.

***
When we moved to Texas seven years ago, we enrolled with the local Master Naturalists (think Master Gardeners on a hike) so we could learn about the rocks, trees, wildflowers, and critters in our new home. The very first picture in this blog was a roadrunner we spotted as we drove around the neighborhood. And when we moved to our current home one year later, we thought we saw a coyote slide through the mist one morning. Or maybe it was a fox. We dropped out of the Master Naturalists before the class on mammals, so we never were quite sure.
***
After my mom passed away, my dad and I continued to have long talks on the phone each week … always a bit of a challenge since both of us had/have significant hearing impairments. One evening as we sat talking, a beautiful gray fox walked onto the porch outside my window. It was not the least bit perturbed to see me not six feet away. “Yep,” I thought, “it must’ve been a fox we saw when we first moved in.”

***
Don: “Do you hear them?”
Me: “Uhhh … I don’t hear anything.”
Don: “Coyotes! Listen!”
We have this exchange every few months, but almost always upon opening the front door, the sound stops.
Me: “Maybe you heard foxes.”
***
Don was looking out the west window in our bedroom this morning. A Rio Grande turkey was right outside, pecking away at something in the grass. We often see wild turkeys in the yard. Every so often, they roost in our trees. During mating season, the males strut their stuff. Usually there are lots of them. Not today.

The sun was low in the sky, slanting through the trees.

“Look how iridescent the back feathers are!” Don observed.
But all I could see was the pattern of dark and light bars on the wing feathers … like patchwork. Then thought, “I really should make a turkey feather patch like the one on Land of Flood and Drought.”
A few minutes later while brushing my teeth, I looked out the north window.
“Don! Come here … quick!!!  Coyotes! Four of them!!”
They were headed for the floodplain, probably 300′ away, running back and forth. Strangely. And there was no doubt … they were most definitely not foxes.

Then I saw a turkey flail into the air, only to be pulled back down to earth.

The ending only took a couple of minutes.

Afterward, we walked down the east trail and watched as a coyote trotted up the west trail, a bloody wing gripped in its mouth.

A few hours later, we took walking sticks and went out on the floodplain. I had spotted large scat recently, thinking it to be from a neighborhood dog. Now thinking not, hindsight being 20/20 …
Then I saw the feathers: wind blown across the flood plain … 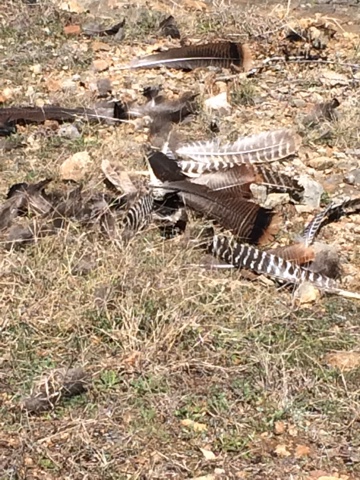 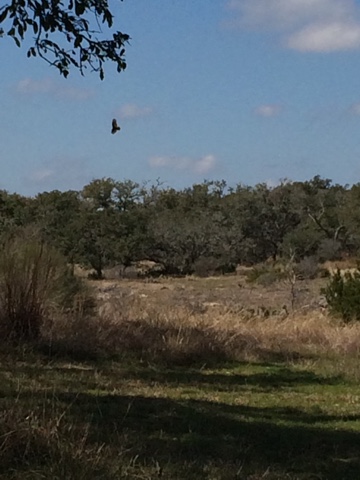 I picked up a feather. Carried it back to our sitting spot and contemplated it … 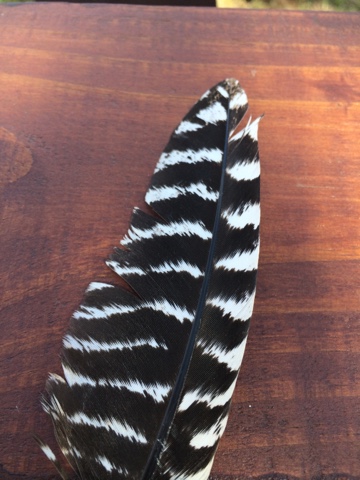 “Are you planning on getting out of your pajamas?”

“Probably … eventually … after all, we’ve only just had lunch.”
That’s how it goes when I’m well into something. Time flies by and I really couldn’t care less about appearances (although in my defense, I will say I did brush my teeth this morning).
So what was all the fuss about? Well, I had two things in mind: yesterday’s lantana patch and today’s snow patch …
Because even though we are well out of the East Coast weather system, I remember what driving snow felt like. Not to mention Jude’s post this morning, which reminded me what driving snow looks like, which was indeed like the B-side of Patch #10.
The snow was easily done. The lantana, on the other hand, took up most of the morning. First in tracing its outlines …
transferring them to cloth …
looking closely at the colors in an attempt to find the right flosses …
then finally committing to stitch …
The leaves are okay, the flowers less so. I suppose I could call this an impression rather than a representation. Still, I learned along the way and didn’t feel compelled to rip everything out in search of perfection. The patch records the reality of the process, which makes it good enough for me.
Finally, another weather week was added to the calendar … 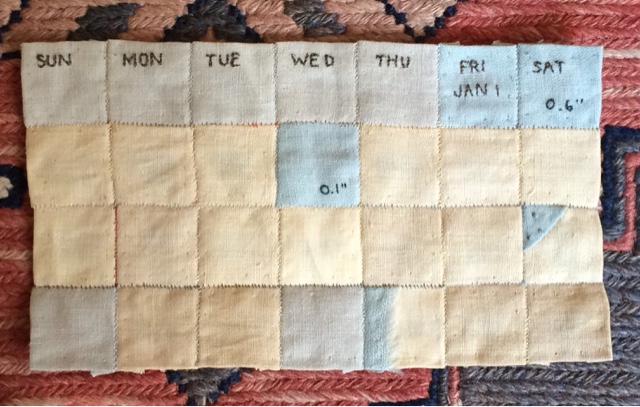 including a dark cloud seam on the horizon …
Okay. Time to get dressed.