I’ve been thinking a lot about what stories I want to tell and how cloth might be a part of that. This is where it ended up today …

And here’s how I got there.

I’ve been reading Jude Hill’s Spirit Cloth blog from the beginning … again. This time with more insight and the intention of taking notes with Jude’s words on the right and my responses to them on the left …

My all-time favorite cloth (to date) is Remember 2016, with a patch for each day of the year I turned 60. It currently lives on the back of a chair where I can see it every day …

Many of the patches hold words and I realized how much they are a part of my way. So I went to my boxes of cloth looking for these scraps of my mom’s shirt …

It was a simple, printed cotton, button-down shirt … one I claimed from my parents’ house on Shelter Island after my mom died in 2008. I wore it as a nightshirt for years, until it began to fall apart. Then I began to use it in paperless pieced cloth …

a technique learned from Jude.

For this new project, I chose a piece of cloth from the worn elbow, one that had a flaw in it, and pondered what to write …

The pen I used has a pleasingly fine tip, but an annoying habit of vaporizing so quickly that it has to be reapplied again and again …

I chose to stitch the letters in creamy white silk, remembering this picture from Meg’s graduation in 2005, just before mom became debilitated by the cerebral vasculitis that would not be diagnosed until after her death …

Then I moved on to a second patch, inspired by this picture of Meg’s daughter, Parker …

She’s holding a miniature towel I made for the play kitchen her parents got for her second birthday, hence …

After stitching the words (and I’m feeling a bit rusty as it’s been a while), I pieced the two patches together with an overcast seam …

thereby joining the generations from my mom to my granddaughter …

If it wasn’t personal before, it’s personal now.

My first trip to Virginia took place in the fall of my junior year in high school. Visiting two campuses as part of a college-shopping tour, I ultimately chose William and Mary in Williamsburg. But it was a close call and I could have just as easily ended up at UVA in Charlottesville.

The 35 years I spent in Williamsburg, getting my degree, meeting and then marrying Don, forging a library career and raising two daughters, included many trips to Charlottesville. I well remember listening to Bonnie Raitt singing in the UVA arena, visiting Monticello with 3 year old Meg and tiny infant Melissa, eating “grillswith” (griddled Krispy Kreme donuts topped with ice cream) at the corner cafe and bagels from Bodo’s. When we drove Meg home with two broken arms after her car accident at Smith Mountain Lake, we stopped in Charlottesville to pick up sandwiches. Wanting to celebrate our 25th wedding anniversary in style, we went to the Boar’s Head Inn. We cheered from the sidelines as our local high school football team won the state championship in Charlottesville.

You get the idea.

So this past weekend hit home, or close to it. Raised a radical liberal New Yorker, I went off to college and learned fast that many (not all) Virginians referred to the “War between the States” or “the recent unpleasantness” rather than the Civil War. The Commonwealth celebrated the birth of Jefferson Davis, but there was no observance of Lincoln’s birthday. And when a professor waxed eloquent about the virtues of sorghum over maple syrup, I muttered under my breath “but we won the war,” and then took a long drag on my cigarette and blew smoke. Tobacco. How ironic.

Virginia changed a lot 0ver the 35 years from 1974 to 2009, when we finally pulled up stakes and headed for Texas (I know, I know). It had moved from red to purple and was leaning blue. There was hope.

And the decision to remove the statue of Robert E. Lee in Charlottesville was yet another step in the correct direction (I won’t say “right”). Though it ended in tragedy, I dare to hope it galvanizes other localities to see the insanity of memorializing hatred and slavery.

So today I stitched, taking words written by Marti in New Mexico, in response to the Peace Pin Project that began last February …

There will be other peace patches for a cloth I’m thinking will be named It’s all connected. Eventually, I hope to have enough to make a two-sided peace shawl, stitched together Pojagi-style.

Because life goes on and I have much more to say.

This is how I began yesterday’s post entitled Forgiveness:

Three more peace pins have fallen from my fingers, the a-sides all hand-dyed cochineal linen (which is not as pink as it looks here, but the color was saturated enough to give my camera fits) … 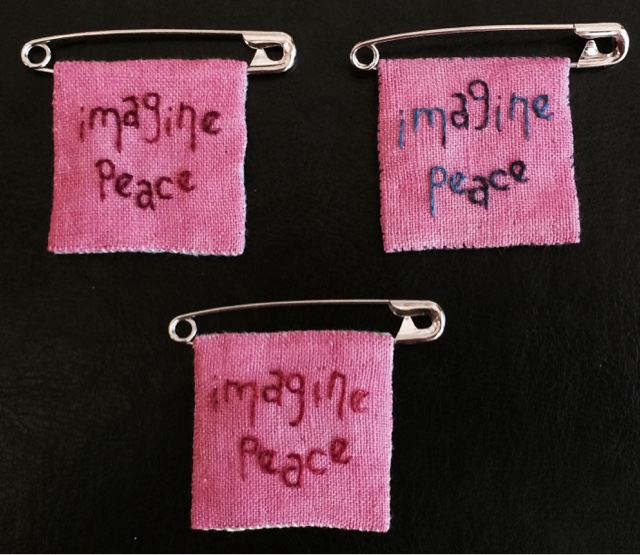 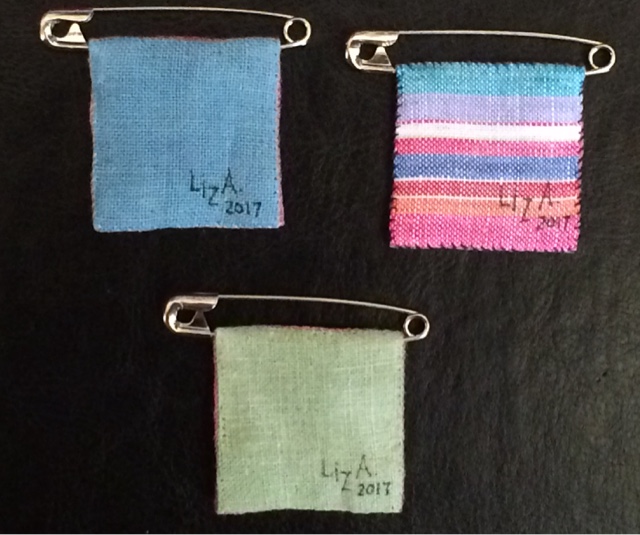 Clockwise from the upper left, indigo blue and rose for Stephanie in California, any and all colors for Vicky in Washington, and wild rose colors for Suzanna in California.

There was more, but I did the blog-equivalent of hitting “Reply to all” instead of “Reply to sender” … I inadvertently hit “Publish” instead of “Save to draft.”

So it was that some of you saw the unedited, first draft version of what appears below (with a tip of the hat to Ann Lamott’s classic Bird by bird, which introduced me to the notion of “sh—y first drafts”). I didn’t realize my error until later in the day when comments started to arrive in my inbox. I quickly rectified my error by reverting the post to draft mode and sent explanatory emails to the commenters. Then looked at the stats and realized the post had been seen rather more widely than I might have hoped.

Here’s the more circumspect version of my less-than-perfect first draft:

Back in my teaching days I attended an amazing training program called the Eastern Virginia Writing Project (one of 200-some sites in the federally-funded National Writing Project). The two month Summer Institute was designed to give us the tools to become better teachers of writing by taking us through the recursive writing process of plan, draft, revise, edit … repeat as needed, then publish (cue irony here).

Anyway, one of many prompts was to write about forgiveness. I liked the resulting piece well enough to revisit it in one of my earliest blog posts entitled Food is Love (http://imgoingtotexas.blogspot.com/2009/08/food-is-love.html).

Long story short, I re-revisited that piece yesterday. Without going into the details this time around, I will simply say: life is recursive and being a parent never ends, even when your kids are in their thirties. The corollary to that being: the need to seek forgiveness never ends either.

And who knows, perhaps yesterday’s slip was more Freudian than not. Because it turns out my daughter was among those who read the inadvertent post. Now a parent herself, she brought a new perspective to my gaffe and sent me a text message that read, “Please don’t feel guilty.” To which I responded, “But I do guilt so well.”

So I guess I’ve already been forgiven … but I’m still bringing her some cookie dough tomorrow.

N.B. To those kindly commented yesterday, I am keeping your comments along with the original post, which will remain a draft in perpetuity (or however long Blogger exists). Thank you all, as always, for your presence here.