The Texas Tarot evolved in fits and starts. The first and easiest pass was determining what creatures would populate the Major Arcana. Next came the Minor Arcana court cards (Pages, Knights, Queens and Kings), and then the Ace through Ten Minor Arcana last of all (Wands, Pentacles, Swords and Cups).

Working my way through the tarot deck in a random series of draws, I’ve made tweaks to some of my original assumptions, but none more than the Wands court cards. The notebook in which I put my ideas has so many scratch marks in the Wands court that I literally had to start over. And irony abounds, as I ended up where I began: with songbirds.

Fortunately, the tarot deck waited patiently for me to sort my way through. It was only yesterday when I finally drew the first of the four Wands court cards, the Knight …

Brilliantly colored Painted Buntings were often visible from my stitching window back in the Hill Country. Never still for long, their plumage would catch my eye, causing me to get to my feet as I tried to catch another glimpse. Hence the windowed backdrop for this card/collage … 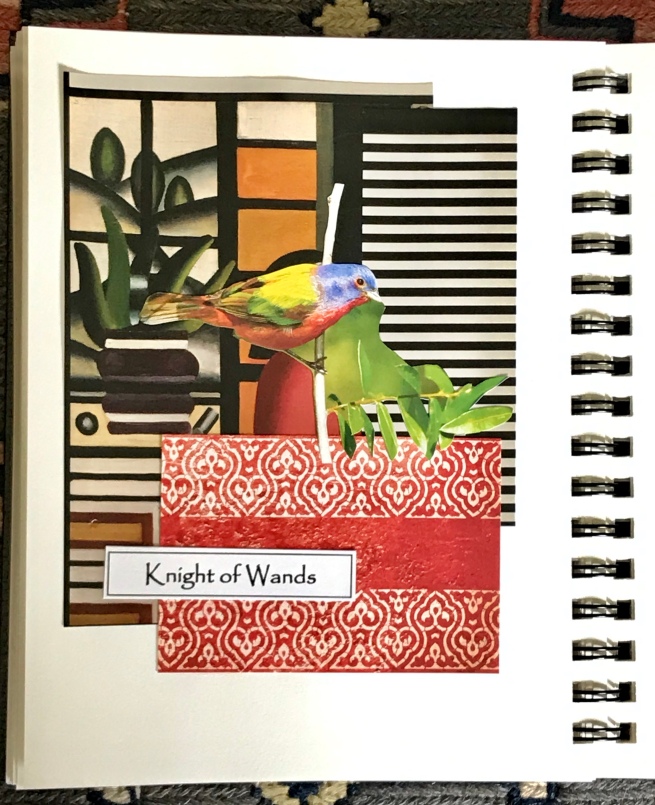 From now on, the Knight of Wands will be my personal symbol for the potential of these Covid times, the fire-y anger that can lead to creating a better world.