Long ago (in the 1980s) and faraway (in Virginia) I spent some time as the Needleworker at Colonial Williamsburg. In addition to teaching needlework I was given some interesting assignments, one of which was stitching napkins for the dining room in the (then) newly refurbished Governor’s Palace.

A Smithsonian Institution publication entitled The Copp Family Textiles (1971) proved most useful as it described how colonial household linens were marked in cross stitch to keep sets together. Similar to modern day monogramming, marked linens usually included a married couple’s initials. And, using the Ann Pasteur Maupin sampler as a Williamsburg precedent, it was decided that the back of each Governor’s Palace napkin was to look virtually as neat as the front.
My project was overseen by the Curator of Textiles and passed muster. As best I recall, I made ten napkins (give or take). The following year I made a pair at home to give to my parents for their 30th wedding anniversary: B for Barnett, A for Arthur, R for Ruth. The linen was 60 threads per inch, so the marking was only 1″ high. And yes, the back looked pretty tidy, which makes sense when you can see both sides.
Fast forward 32 years … as part of my online study at “Considering Weave” I decided to try weaving some 60-count linen by hand. Not having fine enough thread (50/2 was the only linen I had) it ended up closer to 1.75″ across. 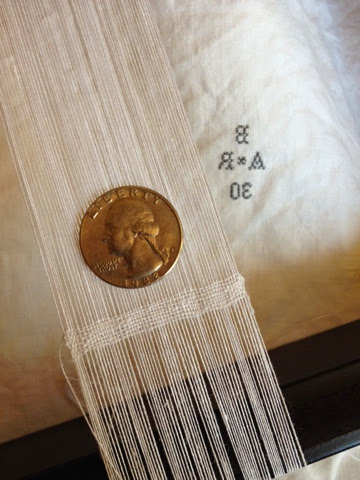 So far it’s been an interesting experience and I’m starting to wonder where my bit of even-weave cloth will end up. I’ll have to post another picture when it’s complete and off my shadow-box “loom.”
Oh … about the quarter. I grabbed it out of Don’s coin jar and realized after snapping the pictures that it’s dated 1982, my last year at CW as Needleworker and (no coincidence) the year Meg was born.

4 thoughts on “– History continued: Marking stitch and even weaving”