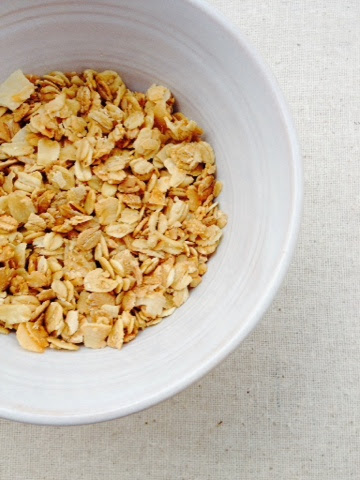 One of the first posts on this blog included a recipe for Garrison Trail Granola. Since 2009, it has had a place at our breakfast table on an almost-daily basis. Its unique blend of oats, olive oil, maple syrup, and an every-changing combo of raw nuts and seeds made a perfect accompaniment to Greek yogurt. Until …
Don had a pain in the gut that he self-diagnosed as an overdose of nuts and seeds. So those got tossed out of the recipe. But oats alone proved to be a bit bland, so we added Sunridge Farms Organic Five Grain Cereal Flakes from the Central Market bulk bins to the mix. Better.
Somewhere along the way, I spotted a granola recipe that touted brown sugar so I tried adding a quarter cup to spark up the flavor. Nice.
Then our Unio olive oil ran out … and we couldn’t get anymore … anywhere. This was a major turning point, as the other olive oils we tried just didn’t cut it. So I went out on a limb and tried coconut oil. Oh my my … yes!
However, the addition of coconut oil was not a one-and-done … I found out the hard way that there is coconut oil refined to the point of tastelessness (to be avoided at all costs) and then there is coconut oil that is “unrefined, expeller pressed” (much, much better). Kinda like olive oil, actually.
If I had any doubts about the wisdom of using a saturated oil (even though in relatively small quantities), they were dispelled by recent news reports of a medical journal article debunking the “sat fat is bad for you” myth.
Bottom line: the recipe has now morphed to the point of unrecognizable. So without further ado, here is the new and improved version:

1 lb. five-grain rolled cereal (uncooked)
9 oz. (1/2 container) old fashioned oats (not quick oats!)
1 cup raw coconut flakes (the bigger the better)
1/2 cup unrefined coconut oil
1 cup maple syrup (Grade B if you can find it)
1 1/2 tsp. Kosher salt
2 tsp. vanilla extract
1/3 cup light brown sugar
Optional: 1/2 cup pasteurized egg whites for added protein
Combine cereal, oats, and coconut flakes in a large mixing bowl.
In a small, microwave-proof bowl combine coconut oil and maple syrup. Microwave for 1 minute on high. Whisk in salt, vanilla, and light brown sugar (and optional egg whites).
Pour oil/syrup mixture over cereal/coconut mixture and stir until evenly coated.
Divide mixture between two cookie sheets and place in a 225 degree oven for 2 hours.  Every 30 minutes, remove the pans from the oven, turn the granola with a metal spatula, then return the pans to the oven on opposite shelves to ensure even browning. Cool completely after baking before storing in a sealed container.

Note: I’ve recently discovered Coombs Family Grade B Maple Syrup and their website has a “Where to Buy” link.

A Note on Nuts and/or Seeds
If you miss having nuts and/or seeds in your granola, by all means add them in. However, since Don is avoiding them these days, I make a separate batch of nuts for myself.
Nana’s Nuts (revised 8/27/2015)

Rough chop the almonds and cashews, then combine with pistachios in a large bowl.

Nuke the maple syrup and coconut oil for one minute on high. Whisk in brown sugar, salt, and vanilla. Pour over nuts and stir until coated.

Bake at 225 for 2 1/2 hours, being sure to turn the nuts every 30 minutes so they cook evenly.
BTW, aside from being a great addition to granola, a small handful of nuts makes a great snack.